Nutley was blanketed in the first snowfall of the season yesterday.  Starting as heavy drops of raining slush around 10:30 a.m., it changed to heavy wet snow by 11:30 a.m.  Throughout the day it melted on the ground, however, by 4 p.m. it was accumulating on the ground. Snapping and swooshing noises signaled branches breaking and trees falling.  Going from window to window to door after every crash, we saw branches down everywhere. 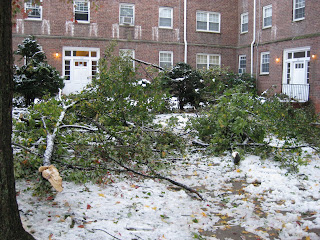 Dianne called last night to say that Mayor Cocchiola declared a Nutley state-of-emergency because so many trees were down and branches and trees were still falling.  The Mayor also postponed the Survivors' Brunch scheduled for this morning.

My sister Jackie called around 10 p.m. to say that she heard we were in the middle of a snowstorm.  She was in Minneapolis at the airport hoping that flights to Philadelphia would not be affected. 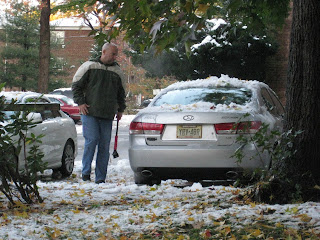 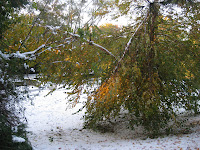 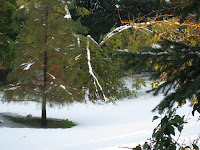 This morning, the sun is shining brightly and the landscape is littered with leaves and snow and trees and branches.  Bob and Grace were here last night.  It took him a while to clean the ice and snow off of his car this morning.  He returned with coffee from Dunkin' Donuts to report that it was really bad around town. Trees were down everywhere. The Farmer's Almanac predicts a mild winter, but I wonder....
Posted by JoAnn Tropiano at 9:21 AM