After the shoe shopping described below, we headed off to spend the afternoon and evening at Sesame Place, in Langhorne, PA.  It was a beautiful day. There was a huge crowd. The park was colorful, nostalgic and chaotic with happy little kids. The many water slides and pools were popular attractions.  And, we were EXHAUSTED driving home, except for Grace who chattered, asked questions about our front seat conversations (she doesn't miss anything) and watched "Toy Story" without falling asleep. 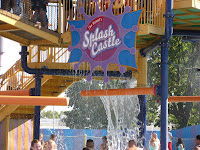 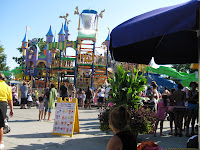 The Count's Splash Castle was a riot.  It dumped a huge pail of water on the crowd below in the pool every few minutes.
Posted by JoAnn Tropiano at 12:48 PM 1 comments 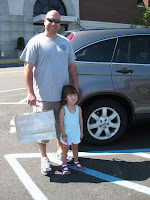 A tradition continues. Shopping for school shoes is a tradition I hope to continue with my granddaughter Grace, pictured here in one pair of the new shoes. That's her dad, Rob, carrying the bag.

Christine Donato at the library once described how her mother still took her to shop for school shoes after she reached adulthood. Chris was a school librarian before she retired and came to work with us. Her father continued that tradition after her mother passed away. I loved that story, especially since my daughter is a school librarian.  After hearing the story, I began taking her to shop for school shoes.  We had not done that since she was a student.

Yesterday, Rob, Grace and I visited two shoe stores, the Little Shoe Box and Nordstrom. It was a successful trip.  Grace is wearing the pair she picked in the photo.  Black patent leather MaryJanes, requested by her mom, are in the bag.
Posted by JoAnn Tropiano at 12:31 PM 1 comments


Listened to the audio book and I was reluctant to stop.  Milo Sturgis investigates and Alex Delaware, psychologist, consults in a team-up that never fails to produce twists and turns.

View all my reviews
Posted by JoAnn Tropiano at 5:11 PM 0 comments 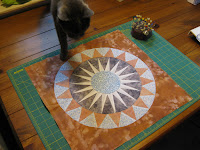 August 18-22, 2010, Jackie and I drove to NH for the World Quilt Festival.  On Thursday, we participated in an all-day class taught by Barbara Barber from the UK.  BB is famous for her circular piecing techniques and her book "Really Sharp Piecing."  This is the block that I began in her class and just finished today at home. Clovis, my quilting companion, was very curious about this block.  She had never seen me quilt anything in a circle.  I was pretty pleased with the result.  It took some trial and error to get this one right. Now, I think I could do another easily. 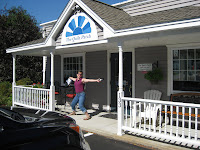 On Friday, we devised our own "shop hop" and visited four shops on our way up to Center Harbor, the home of Keepsake Quilting which Jackie dubbed "mecca for quilters."  Our first stop at The Quilt Patch in Bedford set the playful tone of the whole day.  The proprietor, Sue Trask, had just opened the store and watered her garden as we arrived.  We spent a ton of money, laughed, consulted, pondered, drove, criticized the GPS and even had a wilderness adventure that will go down in family lore. ;-) Getting to Keepsake Quilting was so much fun.
Finally we arrived at Keepsake Quilting in Center Harbor, a beautiful resort town. 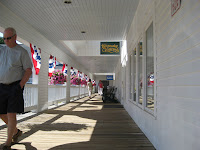 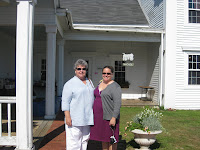 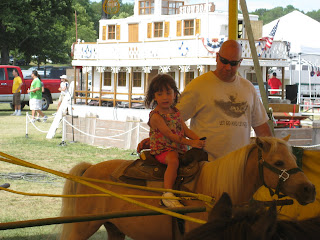 What's a visit to the State Fair without a pony ride? Rob, Kat, Grace and I spent the Saturday, August 14th. in Sparta for the event.

I learned about oxen.  I was never too sure exactly what kind of cattle they were. However, there were three pairs at the fair and some very knowledgeable people who set me straight. 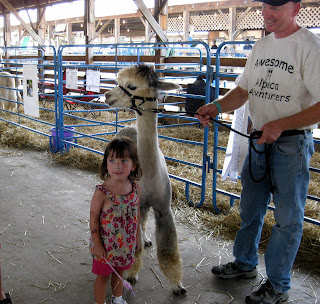 The livestock displays included this little guy who was very camera and child friendly.  Grace was a little hesitant at first. 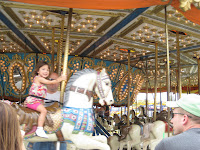 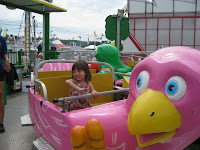 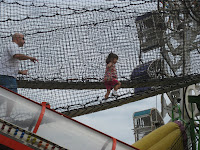 
Listening to the audio book just downloaded from the Nutley Library Listen NJNW site.  A great service, these unabridged audio books go onto my MP3 player for listening in the car, during walks and while sewing.  Love them!

View all my reviews >>
Posted by JoAnn Tropiano at 2:45 PM 0 comments

A good first novel, the police procedures are painstakingly described, however, the action does not suffer. Detective Wallander, brooding and instrocspective, is very human. His relentless pursuit of leads and theories kept me right there with him in the story. I will read more mysteries from this Swedish author.
Posted by JoAnn Tropiano at 8:47 PM 0 comments


Nothing new or interesting here, Kellerman is becoming stale.

View all my reviews >>
Posted by JoAnn Tropiano at 8:26 PM 0 comments

View all my reviews >>
Posted by JoAnn Tropiano at 8:22 PM 0 comments