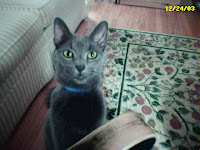 Clovis ran the house from the day she was born.

Jackie brought home a stray cat, suspiciously fat. A few weeks later, her bedroom closet was home to the mom and four (?) kittens.  Clovis was the largest, loudest and first able to climb out of their box :-) Jackie begged to keep her, so we found homes for the mom and the others and Clovis became part of our family.

Her name came from Stephen King's film "Sleepwalkers."  Jackie was into her horror film period.  Clovis was deputy Andy's cat.  In the film, the cat is the heroin who saves Tanya from vampire Charles and then leads the pack of cats, which had been gathering nearby, into an attack on vampire Mary thus saving Tanya again.  Jackie was 13 years old when she named Clovis.  I guess she felt that she needed protection from vampires.

Our Clovis was a character.  She is missed and remembered with love.
Posted by JoAnn Tropiano at 9:06 AM